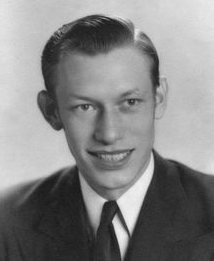 OVERVIEW
Harold Franklin “Hawkshaw” Hawkins (December 22, 1921 – March 5, 1963) was an American country music singer popular from the 1950s into the early 1960s.He was known for his rich, smooth vocals and music drawn from blues, boogie and honky-tonk. At 6 ft 5 inches tall, Hawkins had an imposing stage presence, and he dressed more conservatively than some other male country singers. Hawkins died in the 1963 plane crash that also killed country stars Patsy Cline and Cowboy Copas. He was a member of the Grand Ole Opry and was married to country star Jean Shepard. Hawkshaw was buried at Forest Lawn Memorial Gardens in Goodlettsville, Tennessee
EARLY YEARS
Harold Hawkins was born on December 22, 1921, in Huntington, West Virginia, United States. He gained his nickname as a boy after helping a neighbor track down two missing fishing rods: the neighbor called him “Hawkshaw” after the title character in the comic strip, Hawkshaw the Detective. He reportedly traded five trapped rabbits for his first guitar, and performed on WCMI-AM in Ashland, Kentucky. At 16, he won a talent competition and a job on WSAZ-AM in Huntington, where he formed Hawkshaw and Sherlock with Clarence Jack. They moved over to WCHS-AM in Charleston, West Virginia in the late 1930s. In 1940, at 19, he married Reva Mason Barbour, a 16-year-old from Huntington. 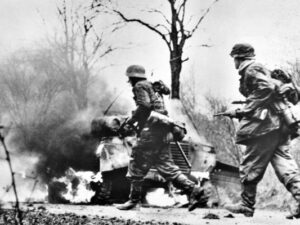 During 1941, Hawkins traveled far and wide across the United States with a country-themed musical revue. He next entered the United States Army in 1943 during World War II, and in the army he served as an engineer stationed near Paris, Texas, where he and friends performed at local clubs. Later on, as a staff sergeant, he was stationed overseas in France and he fought heroically in the Battle of the Bulge, for which he was awarded four battle stars during his 15 months of combat. He was also stationed in Manila and performed there on the radio. 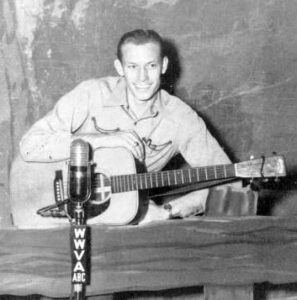 After he was discharged from the Army, Hawkins became a regular on WWVA Jamboree from 1945 to 1954 in Wheeling, West Virginia. In 1946, he signed a recording contract with King Records of Cincinnati, Ohio. This nearly never happened, as Syd Nathan almost threw his poorly-made demonstration record away without listening to it. However, after finally listening, Nathan agreed to record four Hawkins sides in West Virginia. His two of those early recordings with King, “Pan American” and “Dog House Boogie”, became top ten country hits. A minor hit, and the song that in time become his signature tune, was “The Sunny Side of the Mountain.” “Slow Poke”, recorded in 1951, was another notable King recording. He initially stayed with that label until 1953. Because of his height of six feet, five inches and his outgoing personality, he was christened “Eleven Yards of Personality”. On more than one occasion, he posed for publicity photos alongside Grand Ole Opry star and Country Music Hall of Fame member, Little Jimmie Dickens, who was all of 4′-11″ tall. In 1951, Hawkins and his wife adopted four-year old Susan Marlene. They divorced in 1958 and Susan traveled back and forth between her parents in summers and for holidays.

Beginning in 1954, Hawkins was a regular performer on ABC Radio and TV’s Ozark Jubilee in Springfield, Missouri, where he met his second wife, Jean Shepard. After a few years with Columbia and RCA Records, he joined the Grand Ole Opry and returned to King; and in 1962 he recorded his biggest hit, “Lonesome 7-7203”. It first appeared on the Billboard country chart as a March 2, 1963 release, three days before Hawkins died. The song was absent from the charts for the two weeks following his death, but re-appeared on March 23 and spent 25 weeks on the chart, four of them at No. 1, an accomplishment that eluded him in life.

On March 3, 1963, Hawkins, Patsy Cline and Cowboy Copas performed at a benefit concert at the Soldiers and Sailors Memorial Hall in Kansas City, Kansas for the family of disc jockey “Cactus” Jack Call, who had died in January after an automobile accident. Among the performers was Billy Walker, who received an urgent phone call and needed to return to Nashville immediately. Hawkins gave Walker his commercial airline ticket and instead flew back in a private plane in Walker’s place.
On March 5, Hawkins, Cline and Copas left for Nashville in a Piper Comanche piloted by Ramsey “Randy” Hughes, Cline’s manager (and Copas’ son-in-law).

After stopping to refuel in Dyersburg, Tennessee, the craft took off at 6:07 p.m. The plane flew into severe weather, crashing at 6:29 p.m. in a forest near Camden, Tennessee, 90 miles from Nashville. There were no survivors. Fans around the world mourned the loss; Hawkshaw was survived by his daughter Susan Marlene, his young son Donnie, and his wife Jean Shepard, who was pregnant at the time with their second son, Harold Franklin Hawkins, to later be known as Hawk Jr. and Hawk II, a country music entertainer in his own right, gave birth to him one month after his father’s death. Hawkins rests in Forest Lawn Memorial Gardens in Goodlettsville, TN in an area known as Music Row, along with with Copas and other country music stars. The remote location of the plane crash outside Camden is commemorated by a stone marker, dedicated on July 6, 1996. Hawkins is mentioned in the song, “Love Never Dies” on Martin Simpson’s 2003 album, “Righteousness and Humidity”. In that song, Simpson meets an old truck driver who played guitar: “I gave old Hawkshaw a Gibson one time, it was a J-200, man, such a sweet neck! They say it stood up like a country grave marker, right there in the middle of that plane wreck.”